skip to main | skip to sidebar

Opalco is San Juan County's electricity provider. Opalco is one of the most progressive utilities in the country. A recent triple rebate program allowed the Garden House to purchase a heat pump hot water tank. 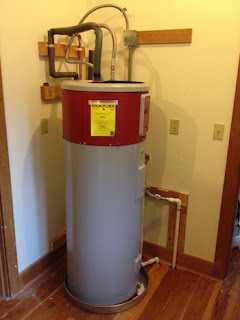 In this system, hot water is created by extracting the heat in the air and pumping it into the tank's water, which is 60% more efficient than just heating the water with a large electric coil. If every household in America switched to heating hot water via a heat pump hot water system, 118   500 mw coal fired power plants could be taken off line. You get the same hot water, while America sets a leadership bar for the world to follow.

Washing clothes in cold water is a fast, zero cost way to start. Clothes washed in cold water last longer, smell just as clean, and retain brighter colors than clothes washed in hot water, since hot water, along with soap and agitation, is much more abrasive. Clothes washed in cold water use 90% less electricity; 10% of the electricity runs the washing machine, while 90% heats the water. All that hot water is waste, since it buys you nothing but a larger electric bill, clothes that wear out sooner and look faded, and much more carbon in the sky. If everyone in America just pushed the "cold" water temperature setting when washing his/her clothes, sheets and towels, (figuring 4 loads a week at 4 kilowatt hours per load just for the hot water) 32   500 mw coal fired power plants would not have to run 24/7. They would not have to run at all. They could go in the "old technology" museum, along with rotary phones and horseshoes.

Habits are hard to change, especially when they never went through a conscious process on the way to becoming automatic. Next time you are running a load of laundry, stretch that mind. Press the cold water option and live on the new, wild, 21st century side. 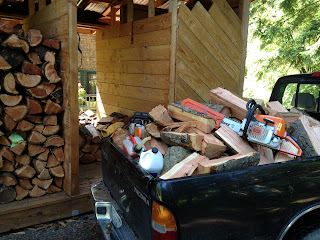 I'm a year late in getting the firewood ready. Too many alligators. Two of the three bins in the woodshed are filled; this load is headed for the 3rd bin. Each bin holds one and a half cords. Depending on the winter, I could easily use all three bins. Firewood for the Garden House comes from the same place, Orchard Falls Farm, about a half mile down the road. Heat supplied by firewood is carbon neutral, penetratingly welcome on wet chilly days, and requires zero technology to operate. (Technology is really really helpful in moving wood from its form as a tree to its placement inside the stove; a half gallon of gasoline might, translated thru a chain saw, tractor, wood splitter and pickup truck, easily make a month's worth of warmth.) Blessings to the billions of interconnected players (soil, sun, water, ideas, people, warehouses, machines, DNA, gravity, ...) that allow this bounty to manifest here.
Posted by Joe at 5:15 PM No comments: 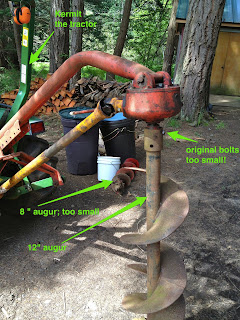 If you have found this blog through the Garden House on Orcas web site, you may have found that website via doebay.net, the umbrella site for a variety of activities going on at the east end of Orcas Island run by the international headquarters of the Doe Bay Triangle, aka me. Across the street (remember this is rural) is the Orchard Falls Farm, maintained by a fairy goddess who joy is creating garden abundance. She would describe herself as an herbalist: the garden (besides vegetables and flowers and raspberries and blueberries) raises calendula flowers, arnica and comfrey for their medicinal properties. The garden was recently expanded to allow for some fruit trees to get protection from the deer. That means a larger fence. That means new fence poles and, more importantly, fence corners. Fence corners must be gnarly to handle the tension of the fence, which means big posts, which means big holes in the ground. A sweet friend donated some old telephone poles cut to length; he also loaned a tractor-mounted post hole auger. Sadly, the 8" auger is just too small for the telephone poles. Another friend loaned us his 12" auger, which we mostly installed today. Turns out the 1/2" bolts from the original mama bear auger were too short for the papa bear auger, requiring a trip to the hardware store. While there, the 5 gallon yellow plastic fuel tanks will be filled with biodiesel to keep Kermit the tractor moving sustainably (smells like french fries). Garden House guests are welcome to walk over to the farm (10 minutes) and, if the goddesses are smiling, procure some bounty.
Posted by Joe at 1:26 PM 3 comments:


Yes it has been three years since I last wrote. Some readers might wonder what caused the hiatus. A medical problem? A long international trip? All but complete disinterest? None of the above. I've not  been sick, been on a trip, or lost interest in the Garden House. I've devoted myself to several projects which have sucked armloads of bandwidth. One involved getting a new roof on the Garden House, a metal roof that will easily last several decades, assuring dry and fire-safe comfort to guests.
Another project involves a relationship. This one with a piano. I'm taking lessons from one of the best jazz pianists on the west coast. It's been a couple of years so far; I feel like I've learned to pull myself up on a chair and attempting to take a few steps before I crash back to the floor. In order to compound my musical bandwidth challenge, I recently took up lessons on/with a bass.

The big bandwidth enchilada has been an engagement with the biggest dragon of the 21st century: global warming. Lacking everything save the madness of Don Quixote, I've decided to charge that part of the dragon that represents electricity. You may know that 90% of the electricity made in America is unsustainably produced. What you may not know is how much electrical energy is being lost, or wasted. Carbon dioxide is an odorless, colorless, invisible gas. Electricity is likewise invisible (yes you see the wires but you don't see the moving electrons). Electrical waste is likewise invisible, whether it takes the form of vampire loads, or insufficient insulation, or old appliances, or benign neglect. Enter, stage left, a new character in the play: the Negawatt. Electricity freed from the bondage of waste. But who's Negawatt's agent, pounding on the door of studio (read: utility and many other) exec's hoping to get a screenplay accepted to be the next Oscar winner? Why, it's the Garden House's own Sundance Here We Come Hopeful, Negawatt Media. Using a philosophy familiar to Garden House guests, the intention is to delight, inform, welcome, introduce and guide the electricity user (that's you since you are reading this) toward the challenge and opportunity to visualize the electrical future you want (I call it V 2.0), find the bridge that gets you from here (V 1.0 with all its outdated and now-harmful side effects) to V 2.0, and then start crossing that bridge. Hopefully with the joyful participation of your household. Then neighborhood. Then community. Then region, state, and country. How about fast!? Viral anyone? Make a change that would normally take 2 generations (40 years) in half a generation (10 years)? You can see why my sword keeps getting dull / I'm whacking it on that dragon constantly. I spend way more time whacking and sharpening than I do writing Garden House blog entries.
One of my mantras (given that I'm in resistance to the slow pace of change) is that I need to embrace the bamboo evolutionary cycle: first it sleeps, then it creeps, then it leaps. Right now it appears the country is in sleep mode. You can help move it to creep mode and if enough of you are wired by the electrifying juice of possibility, move it to leap mode! It's only the biggest 21st century problem you've likely never heard of. Waking up from the slumber induced by the combination of technology, opportunity and cultural expectations requires a chainsaw to cut oneself (or, I should personalize this), me, out of the thinking (really, non-thinking) box. The other day I looked at the dryer and said: "Wait!" I've been using the dryer as part of the laundry cycle at the Garden House since it began in 1972. Hanging up clothes went out of style and my mind in the 1950's. After about 60 years, the clothesline looks appropriate, not dated. I notice that the towels are not as soft even if they smell like fresh air. Will the Garden House guests care? Would they rather have the expected softness of a machine dried towel vs the quiet satisfaction knowing no carbon was released in the preparation of clean fresh-smelling linens or is this entire issue below the consciousness radar screen? To meet the challenges of this century, I imagine we may all need to fire up our indivdual chainsaw's and start cutting the boxes we've quietly built.
Posted by Joe at 2:57 PM No comments:

Rudy, now about 9 years old, arrived as a puppy in February from the Lewis County Animal Shelter. No one really knew his pedigree; by now we've pretty much accepted him as mostly Swiss Mountain Dog (closeto, but distinct from, a Bernese Mtn dog). He loves people, as does his sidekick, Tillie the cat (variously called Attilla the Hun, Tillster, Tillmeister), whose way of expressing her affection at being petted is to drool. You will very likely be greeted by one or both of these animals, each claiming SADD (serious affection deprivation disorder) and gesturing (sometimes rather suggestively) that you Love Them Eternally. It will take virtually no prompting on your part for them to assume an open Garden House (or sometimes car) door means they are invited inside, regardless of what (obviously ineffective) instructions they have had to the contrary. You will likely regret that you left some food item on the picnic table while Rudy is anywhere with a mile when you return from a "quick run" back into the Garden House to retrieve something (salt, fork, whatever). Rudy assumes guide duties when you head for the water, patiently showing you the way and waiting for you to catch up, then, as noted in the guest entry and the photo above, serenely joining you in silence at the water's edge.
Posted by Joe at 4:17 PM No comments: 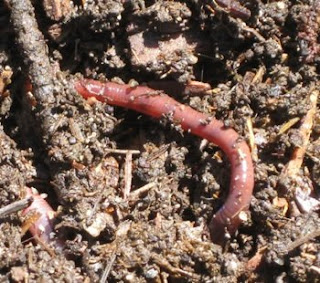 The Garden House has a partnership with two local farms. One, Brightmeadow Farm, supplies organic eggs and chickens raised like chickens were meant to be raised; the other, Orchard Falls Farm, supplies a variety of vegetables and flowers. I supply some equipment (mostly Kermit, a small John Deere Tractor) to both farms as needed; in return I earn access to the rich rewards of fresh food and working outside. Today found me moving special molecules: thousands of worms embedded in about a ton of aged horse manure. Kermit loaded the manure into the pickup; elbow grease unloaded the worms at Orchard Falls Farm. 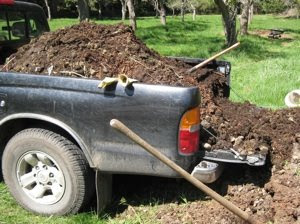 Later in the summer this partnership (the manure, the worms, Kermit, the farms, the sun, water, soil, seeds, loving attention, air, bacteria, birds, Nature, and hundreds of other players, most too small to see) will offer tomatoes, eggs, chickens, 6 kinds of basil, 7 kinds of broccoli, lilies of every color, peonies, beans, strawberries and more; some will find their way to local restaurants, like the Doe Bay Cafe, Cafe Olga and Chimayo's, and some will find their way straight to the table. Know your farmer; know your farm; know your food.
Posted by Joe at 5:22 PM 1 comment: 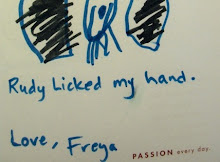 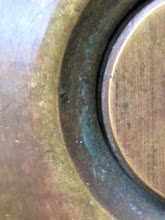 Please let me know what you think about the Garden House and/or the blog. Thanks!